The Electromagnetic Force is the force responsible for holding electrons inside atoms, and hence is responsible for making matter solid as well as all of chemistry. The Weak Force is the force responsible for nuclear decay and radioactivity. The best description that we have of these two forces is in a single unified theory known as electroweak theory. This electroweak theory is the one area of known physics that can not be made theoretically consistent with the particle spectrum currently observed. The difficulty arises because the weak force is carried by massive particles, and all mechanisms known for generating mass predict new physics beyond that currently observed. The minimal extension to current physics required for consistency is a single particle called the Higgs boson, unlike all other known particles this particle is predicted to have no intrinsic spin. The search for this particle is one of the burning issues for particle physics today.

Weiglein and collaborators have analysed Higgs phenomenology in the Standard Model and its supersymmetric extensions. Their program FeynHiggs,  is widely used by theorists and experimentalists for Higgs physics at present and future colliders, now includes also predictions for the most important Higgs production processes at the Tevatron and the LHC.

Together with members of the ATLAS experiment, the IPPP participates in ARTEMIS, a EU funded Research Training Network  which aims to exploit the physics potential of the ATLAS detector at CERN’s Large Hadron Collider in order to explore electroweak symmetry breaking and the origin of mass of elementary particles using the early ATLAS data.

Precision measurements of the masses of the W boson and the top quark from LEP and the Tevatron allow a test of theoretical models at the quantum level. The most precise data reveal a slight preference for the Minimal Supersymmetric Model (green band) over the Standard Model (pink band), that may be explained by contributions from light supersymmetric particles. The current experimental results for the W and top masses (blue ellipse) are shown together with prospective improvements of the experimental accuracies at the LHC (black ellipse) and the ILC (red ellipse). 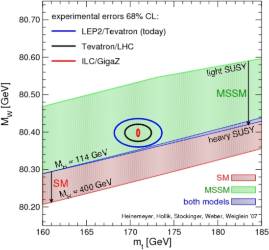 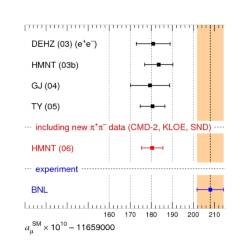 The anomalous magnetic moment of the muon is another precision observable in the Standard Model.  Taking into account electroweak, QED and strong corrections, and the value of the QED coupling at the Z-boson mass, the latest fits incorporating the new e+ e– → ππ data obtained by CMD-2 and KLOE, as well as the corrected SND data, and other improvements, Martin and collaborators obtain a prediction within the Standard Model that is 3.4 σ lower than the value measured by the Brookhaven experiment.

Unlike the Standard Model where there is only one Higgs boson,  in the MSSM there are three neutral Higgs bosons.  This figure shows the production cross sections for the h (red), H (green) and A (blue) Higgs bosons in the Minimal Supersymmetric Standard Model as a function of the Higgs-boson mass for a particular choice of the supersymmetry parameters. 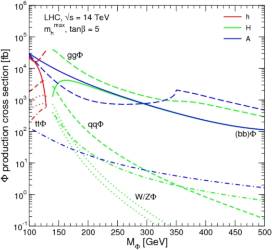