Beyond the Standard Model

The main aim of particle physics is that of finding new physics and developing new theories that describe the Universe at a deeper level than our current theories can.

The Standard Model (SM) of electroweak interactions has proven remarkably successful in describing the phenomena that are presently accessible at collider experiments and we know that the generic energy scale associated with electroweak mass generation (e.g. the mass of the Higgs boson) has to be close to the reach of the present-day experiments. So far, there are virtually no unambiguous hints of possible new structure beyond the SM. However, it would be rather unrealistic to expect that nature will have no more surprises in store between the electroweak energy scale and the very high energy scale (roughly 1016 times larger than present collider energies) at which gravitational effects are expected to become strong and cannot be ignored anymore. This immediately provokes the question Why is the electroweak scale so much smaller than the typical scale of the gravitational forces between masses? One way to circumvent this problem is by introducing a special cancellation mechanism, called supersymmetry which directly links the two fundamentally different types of particles in nature, the fermions (like electrons or quarks) and the bosons (like photons or Higgs bosons). As an added bonus, supersymmetry also makes it possible to achieve unification of the electroweak and strong forces at very high energies, which is excluded in the SM. For this reason supersymmetric models are very popular and are investigated extensively at collider experiments. 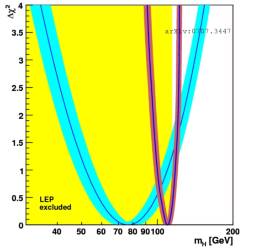 Indirect prediction for the mass of the lightest Higgs boson in the constrained MSSM (CMSSM) from a global fit to electroweak precision observables, B-physics observables and the constraint on the relic desity of cold dark matter in the Universe (red band). The band shows the chi2 distribution relative to the best fit value, and the width of the band indicates the theoretical uncertainties from unknown higher-order corrections. For comparison, the indirect prediction for the mass of the Higgs boson in the Standard Model from a fit to electroweak precision data is also shown (blue band). The parameter region that is excluded from the Higgs searches at LEP is shown in yellow.

Direct prediction for the masses of the two neutral Higgs bosons and the charged Higgs boson in the MSSM as a function of the mass of the CP-odd Higgs boson. The prediction incorporates the complete one-loop and the dominant two-loop quantum corrections. 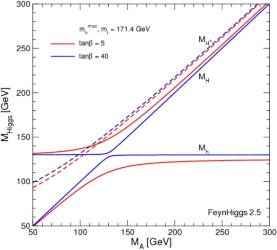 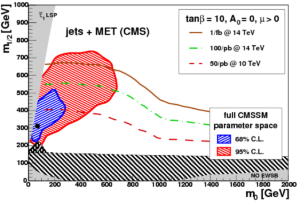 Preferred region for the common fermion and sfermion mass scales in the CMSSM from a global fit to all relevant electroweak precision observables, B-physics observables and the dark matter relic density. The best fit point is indicated by a filled circle, and the 68% (95%) confidence level regions are shown in blue (red). The preferred parameter region provides good prospects for an early SUSY discovery at the LHC. Indicated in the plot are the discovery contours in the CMS search for jets plus missing energy for 1 fb-1 at 14 TeV, 100 pb-1 at 14 TeV and 50 pb-1 at 10 TeV. The dark shaded region is excluded from the searches for supersymmetric particles at LEP and the Tevatron.